For your better understanding how we paraphrase your content, some paraphrasing samples are given below:

Detection of low-molecular-weight proteins in urine as a mean for early diagnosis of any damage to proximal tubules is elaborated in brief. The most extensively employed markers of tubular dysfunction include the alpha 1-microglobulin, retinol-binding protein and beta 2- microglobulin. Initially, the detection of beta-2 microglobulin was considered to be the perfect choice; however, a number of downsides of this marker were later found which were associated with instability at low pH. The current literature reveals that for screening purposes, beta 2-microglobulin can be replaced by alpha-1microglobulin. Currently, the low-molecular-weight proteins serve to be the best indicators of tubular dysfunction thereby facilitating the early diagnosis. Remaining contents have not proved to be helpful for this purpose; although some researchers have proposed the utilization of urine enzymes as markers of tubular dysfunction (Piscator M 1991).

The fast paced sound of ska began to get old. The beats began to slow down with more of an emphasis on the bass line, resulting in rude boy music.” Poverty breads violence” so rude boy music talked of violence and men who did not take nonsense from anybody. However, this caused more violence in Jamaica from lyrical influence and even real rude boys threatening artists to make songs about them. Because of these happenings, musicians did away with the music and began rocksteady, which kept the same slow-paced beats but talked about non-violent activities with continued influences from r and b artists like the Supremes or Donnie Warick.

The beats of the Ska music started slowing down, with more accentuation of the bass line since the fast paced sound of Ska started becoming old. This led to rude boy music. Since poverty leads to violence, the rude boy music was about violence and men who were not willing to listen to any nonsense from anyone. But this led to increased violence in Jamaica due to impact of lyrics. There were even threats from rude boys themselves to produce songs about them. Artists stopped performing this music and inititated with rocksteady since such incidents occurred. There was constant influence of R&B artists, such as Donnie Warick or the Supremes. Rocksteady music had the same slow-paced beats; however, it did mention all the non-violent activities.

Banking plays an important role in the Libyan financial system. A programme of institutional reform has been installed under the process of development and restructuring of the banking sector. Since 2005, with the passage of the banking law, the CBL started implementing a gradual liberalisation programme of the entire banking system, with the aim to modernise, upgrade, strengthen and restructure state-owned banks, including increasing the capital and increasing the private sector by opening the Libyan market gradually for foreign banks (” Oxford Business Group ,The Report Libya “, 2008). By implementing this programme, the banking sector has achieved extraordinary growth and deposits have almost doubled. In 2009, bank equity grew by 58% in the first nine months. At the end of September, the ratio of non-performing loans was decreased (“Global Arab Network,” 2010).

In the Libyan financial system, there is a significant role of banking. Under the progression of development and streamlining of the banking sector, a programme of institutional reform has been established. With the enactment of the banking law, since 2005, the CBL began to apply a gradual programme for liberalisation of the total banking system. This had the purpose of modernising, improving, strengthening and rearranging state-owned banks, including raising the capital and growing the private sector by opening the Libyan market slowly for foreign banks (” Oxford Business Group ,The Report Libya “, 2008). The banking sector has attained remarkable growth and deposits have nearly doubled since this programme has been executed. In the first nine months, bank equity grew by 58% in 2009. The ratio of non-performing loans decreased at the end of September (“Global Arab Network,” 2010). 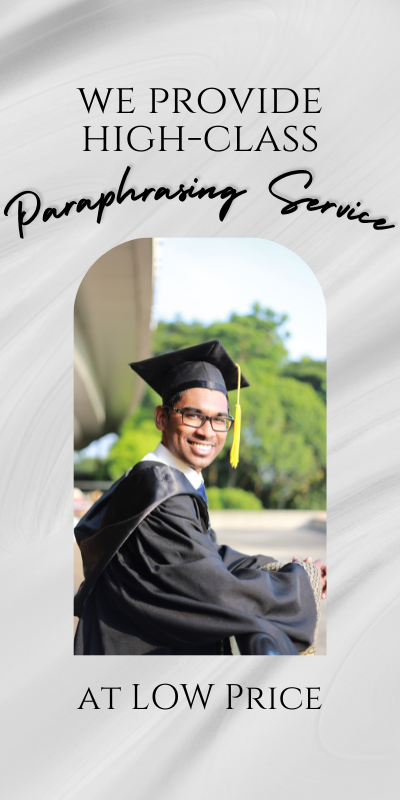 Paraphrasing Matters is the No. 1 paraphrasing services provider of the world and has processed tens of thousands of pages.
© 2009- 2022 ParaphrasingMatters.com | All Rights Reserved